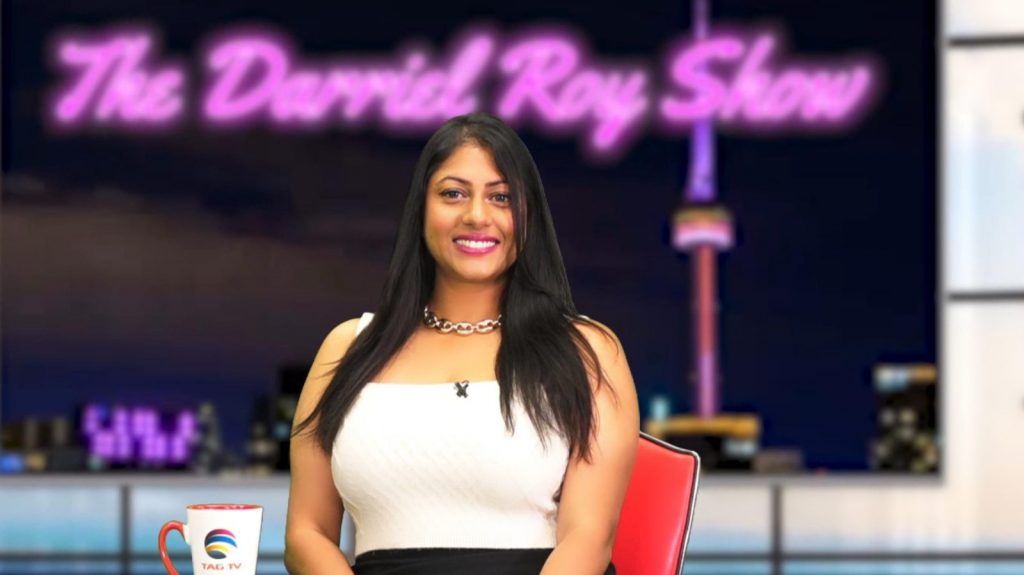 Darriel Roy is a Canadian TV host and journalist. She has interviewed numerous A-list celebrities including, but not limited to, Prime Minister of Canada Justin Trudeau, James Franco, Alec Baldwin, Snoop Dogg, Ed Sheeran, Ryan Reynolds, and Rachel McAdams. During her work as a media personality, she has been featured on The Huffington Post, Rogers Television, Zee TV, MSN, Billboard, and TMZ Live. You can learn more here: www.darrielroy.com, which showcases her red carpet interviews and TV broadcasting experience. Darriel was featured on NBC, FOX, and CBS.

Darriel has been recognized as Oprah Winfrey’s modern day protégé by New York Daily, sharing the same vision with her inspirational and uplifting content on her own show, “The Darriel Roy Show.”

Her show is also available on Apple Podcasts and iHeart Radio podcasts. She also has amassed a large social media following with well over 100,000 followers.

Tell us about who you are and where you are from?

Prior to being a journalist, I was in beauty pageants where I was a delegate for the Miss Universe Canada pageant as well as represented Ontario as Miss Ontario for “The Miss Canada International Pageant.” The pageants taught me about confidence and also gave me a chance to have a platform for various charities. Shortly after, I went to school for media, graduated, and then went to school for journalism where I graduated from the Journalism Broadcasting program. My first job was working at a magazine where I got to interview Dr. Oz! After I graduated, I decided to go to the U.S. to pursue a career in news. I met with a news director in Yuma, Arizona at a local NBC and got hired on the spot! Unfortunately, as a new graduate, I didn’t qualify to get a Visa and could not take the job. I, then, went back to Canada very discouraged. A few months later, I had the chance to attend the CTV election party where I got to meet someone I had looked up to, Canadian journalist Lloyd Robertson. Lloyd said some encouraging words to me that spurred my passion to get back in the field in full force as I was previously discouraged since the NBC job didn’t work out. From there, I went on to become a reporter/host at Rogers Television where I hosted and reported on different TV shows. About a year later, I hosted, produced, and created an event called, “Dare to Dream,” where I had media personalities talk about how they overcame obstacles to achieve their dreams. The show was a hit and led me to discover my passion for inspiring others and showcasing stories of people who dared to dream and go after their goals despite failure. I, then, went on to be a host/producer/co-founder of an entertainment network called, “On The Scene Network (OTSN),” where I interviewed celebrities like Snoop Dogg, Ed Sheeran, and Ryan Reynolds – to name a few. Years later, this led me to where I am now – to host my own show called, “The Darriel Roy Show,” which airs on Apple TV, Roku, Amazon Fire TV and all android boxes internationally on TAG TV. My show also airs on iHeart Radio, Apple Podcasts, Spotify and Google podcasts.

What decisions influenced why you chose to pursue a career in your industry?

I’ve always enjoyed “storytelling.” It’s been a passion of mine for as far as I can remember. Whether it was reading exciting books, public speaking or just telling my friends stories. My love for storytelling led me to go to school for Media and Journalism Broadcasting. Interviewing community leaders, philanthropists, entrepreneurs or celebrities has always sparked a deep curiosity in me and a passion to share their stories to the world. My interest in storytelling led me to where I am today, in having my own platform and brand with, “The Darriel Roy Show.”

What makes your story unique?

My story is unique because it’s not a cookie cutter story. Originally, when I started my path, I thought I would become a news journalist, since I graduated from a news program. Things seemed to go perfectly when I got hired by NBC in the U.S., and it was almost too good to be true. But, when a visa issue held me back, I was forced to dig deep and figure out a way to make my own path, one that I never anticipated or conventional. Through a ton of failure, trial and error, and years of blood, sweat, and tears, I began creating my own brand. I believe we all have our own unique journeys and that each person’s life story is special.

What are some of your goals for the future?

I have too many to list! But to start, I would like to continue to expand my brand and “The Darriel Roy Show” – having my own prime time show on a major network similar to Oprah’s platform, but of course, unique to me. I plan on writing books, becoming a best-selling author, becoming a business mogul, and to create my own clothing or skincare line. In other words, I’d like to build my own, “Darriel Roy” empire!

What skills do you have that led you to be able to succeed in your industry?

Determination and passion are definitely skills that I take pride in. I don’t take NO for an answer! I keep trying until I succeed. While most people might give up after a few obstacles, I get up, dust myself off, and use failure as motivation to succeed. I believe my determination and grit have been a big part of my success. Of course, passion is very important. I absolutely LOVE what I do, so it gives me the motivation to get through obstacles and see the bigger picture despite what’s going on.

Do you have any role models or influences that have guided your journey?

One of my biggest role models is Oprah Winfrey. Even just mentioning her makes me emotional because she’s inspired me in so many ways. Not only is she a fantastic journalist, but she’s well-spoken, intelligent, and most importantly, helps people to elevate and expand to become the best version of themselves. This is exactly what I intend to do. She’s definitely someone I’ve always looked up to as a journalist, and she shares the same mission as me – to inspire and motivate people.

What words of advice would you have for people who aspire to your journey?

My advice would be if you’re passionate about something, whether it’s music, art, journalism, or whatever it is, to pursue it with everything you got. Oftentimes, not everyone can understand or see the vision that we have in our hearts or that we see for ourselves. But, if you see it and feel it in your heart, go after it and don’t take NO for an answer. As I always say, NO simply means next opportunity!

How has the COVID-19 pandemic affected you from a business perspective?

In the beginning of the pandemic, our TV studio closed, and I wasn’t able to film with my team. At that point, I had two options. To stop filming my show or to figure it out on my own. I decided to make my basement into a studio and filmed my show by myself with the help of my editor on zoom, guiding me through setting up the camera, studio lights, test shots, etc. In the beginning, it was very difficult being the host, filming the show, and basically doing the whole production solo aside from the actual editing. But, with anything, it became easier, and I continued filming my show and submitting it to the station to air. The pandemic has also made my show more virtual with Skype interviews versus in-person, whether on a red carpet or in a studio. What at first started as an obstacle turned out to be a blessing in disguise as I learned valuable skills and now have guests, virtually, from all over the globe including celebrities like Sean Paul, Suzanne Somers, Kat Von D, Nicky Jam, Lennox Lewis, etc.

Any other things we should be on the lookout for from you?

We are filming a new season of “The Darriel Roy” that launched in January 2022! Also, our show has expanded into the podcast world and is now available on iHeart Radio and Apple podcasts. We recently celebrated our 100th episode! In 2022, we will continue to expand with bigger guests, more exclusive content, and more expansion to major networks! Stay tuned! You can also follow my journey across all my social media platforms including my Instagram @officialdarriel.